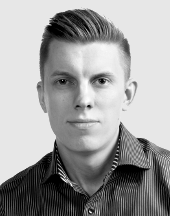 Jon Friström is a UX Researcher and a Cognitive Design Engineer with emphasis on user research, human-in-the-loop simulations and applied early concept testing and user research in all stages of an R&D process. He thrives in the area where UX design meets software development and academic research. Since 2013, when he finished his master studies in Human-Machine Interaction Design engineering at Luleå University of Technology, Jon has been working as a Research Engineer at LTU where he developed, tested and verified different innovative solutions for Drive-by-Wire gear selectors in future cars together with Volvo Cars and Kongsberg automotive. Since 2015 Jon has been involved with Scania as a UX designer, UX Researcher and Product Owner for the simulator capability at the Driver Vehicle Interaction group. During this time he has led the simulator team through various studies, such as explorative studies looking into highly autonomous driving scenarios and early concept future driver assistance systems testing. Jon has also participated in large EU research projects, worked in the exploration of new technology (such as VR, AR, hands, eyes and gesture tracking) for early concept testing within R&D, amongst other activities. In his spare time, Jon likes photography, to travel, to fiddle with technology and to build stuff. He’s currently thinking about how to set up a hydroponic vegetable farm in his new house. View Jon Friström's LinkedIn Profile